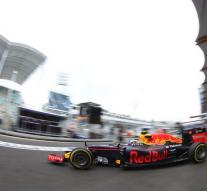 - A dozen Dutch racing fans have been stuck at Baku Airport for a day because they do not have a visa. They arrived yesterday in Azerbaijan for Formula 1.

'The Embassy of the country in The Hague told us that the Grand Prix tickets are enough to buy a visa at the border. But they do not let us in. To be crazy, 'says Arjen de Ligt on behalf of the deceased.

They spent the night on the ground. 'We can only go to the WC under supervision. We do not hear anything, we do not know anything. We prefer to go home again, but they have taken our passports, 'he says.

The friends and women company would enjoy Max Verstappen on the Baku race circuit. 'We had tickets for the main tribune and the pit street, a nice hotel and a lot of fun in a sporting party. We're getting deceived, 'said De Ligt.

They fled with Turkish Airlines from Amsterdam via Istanbul to Baku. 'The airline also does not mention the need for a visa. The embassy website also states that Formula 1 tourists can easily access the border. Not so '

The trip costs a lot of thousands of euros. 'We've lost that as well. We want to get out of that airport, but nobody helps us, 'says the cry of the unfortunate Dutch people.