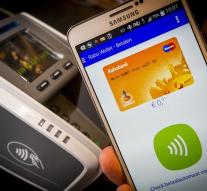 utrecht - All KPN customers with a bank account of Rabobank will be able to pay in the store with a mobile phone. That made the bank and telecom provider on Tuesday in Utrecht.

KPN shares for this new SIM cards out to customers. Payment via any smartphone with a higher version of the Android operating system with a shielded chip on the SIM card. The so-called Rabo Wallet state will not be on the mobile phone, but on the SIM card of KPN. 'Rabo Wallet this is suitable for any mobile phone with a 4 4 version of Android,' promises director Jeroen Verrijdt of Payments and Savings, at Rabobank.

KPN has big plans for the new technique. 'I hope soon from my wallet and keys to be relieved,' says Jasper Snijder, new business director of KPN. He argues that in addition to the debit card a driver's license, passport, entry cards for offices, public transport chip card and concert tickets can be placed on the SIM card. 'And it works even when the battery is empty.

Not by limitations of the technology Apple is still available for those with an iPhone. Rabobank Tuesday could yet make no comment on cooperation with other telecom providers.