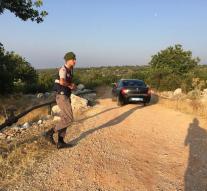 silifke - In the mountains at Silifke this morning is searched for traces of missing Joey Hoffmann. The team started all the while with the search, for the heat gets too much.

A special dog has flown from Ankara. It specializes in smelling a body in rugged terrain. That does not mean that the police assume Joey has died, the chief commissioner of the Corps has already stressed against The Telegraph: 'We just want to investigate all options. '

Joey camped in early July with traveling companions Bjorn and Derya Breukers in the hills near the Turkish coastal town. He disappeared without trace. Bjorn and Derya, who are seen as important witnesses in the case, are present at the search.

Read also: Bjorn and Derya were not together all the time

Interested parties are denied access to the area during the search. Gendarmerie agents, the military police, guard the entrance of the road. Five cars including the special detective dog, Bjorn and Derya, detectives and the chief commissioner dropped the sand road around a quarter to seven (local time).

Last week saturday there was also extensive searching in the hills. Then there were some dozen rescuers, two dogs and two drones involved in the action. However, it was terminated without a result after 2.5 hours.