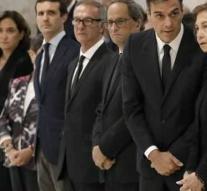 - Queen Sofia of Spain attended Monday the funeral of the saturday opera singer Montserrat Caballé. The farewell ceremony took place in a funeral home in the Les Corts district in Barcelona.

In addition to the royal interest, there was also the presence of a few delegates from Spanish politics. Thus, Prime Minister Pedro Sanchez and the Catalan state premier Quim Torra gave their last honor to the singer. Sofia sat in the first row next to Sanchez. Later she personally gave her condolences to the husband of Caballé and her daughter.

Caballé died at the age of 85 in a hospital in Barcelona. She had health complaints for some time. She is buried next to her parents at Sant Andreu cemetery.