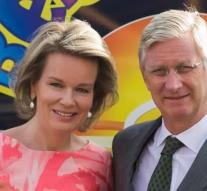 brussels - A quarter of the Belgians want to say goodbye to the monarchy and want to live in a republic. In Flanders King Filip and his family enjoy even less support, almost a third of the Flemings chooses a republic.

According to Belga, a survey by Place Royale, the royal program of the French-speaking commercial sander RTL-TVi, is apparent.

A majority of Belgians, 50.6 percent, are in favor of a purely protocol-based monarchy. The support for a ceremonial kingdoms is greatest among the Dutch-speaking population. 61.2 percent of Dutch speakers want to restrict King Filip's duties, against 35.3 percent of French-speaking Belgians.

A vast majority of the surveyed Belgians, 58.2 percent, is for the preservation of the monarchy. In French-speaking Belgium this is up to 64.8 percent.

On behalf of Place Royale, IVOX research survey conducted a thousand Belgians on the monarchy. The error margin of the survey, which decreased from 12 to 14 September, is 3.02 percent.