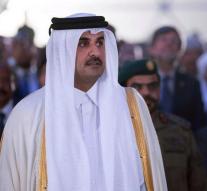 doha - Qatar is open to dialogue to resolve the crisis in the Gulf region. The emir of the country told the Saudi Arabian crown prince to discuss the demands of the four countries that Qatar is hoping to discuss.

The media in both countries are reporting on the phone call. The rapprochement could possibly mean a breakthrough in the conflict that has recently proved to be striking. The emir Tamim bin Hamad al-Thani said to appoint representatives to conduct the dialogue.

What the Emir and Crown Prince Mohammed bin Salman have agreed on is not known. Details are announced as Saudi Arabia has spoken to the United Arab Emirates, Bahrain and Egypt, reporting Saudi media.

The four countries cut political and economic ties with Qatar in June, partly because of alleged support for international terrorism and close ties with Shiyan Iran.