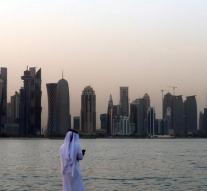 doha - Qatar will receive 48 hours to respond to a list of requirements from four countries boycotting the oil state. The deadline was postponed following a request from the emir of Kuwait, whose country mediates in the conflict. The ultimatum actually ran out of sunday on monday.

SEE ALSO: Qatar does not succumb to pressure from neighboring countries

The neighbors claimed thirteen requirements. Among other things, they want the government in Doha to maintain less close diplomatic relations with archival rival Iran and Al-Jazeera news channel. The four countries are threatening with new measures, if the demands are not agreed on time.

Qatar minister Muhammad bin Abdulrahman al-Thani (Foreign Affairs) complained Saturday that the list of requirements 'was made to be rejected. 'He stressed that his country was willing to talk further under the' right 'conditions, but also stated that Doha does not intend to close Al-Jazeera.

The United States has called upon the countries involved in the conflict to seek a solution together. President Donald Trump called on Sunday according to the White House with the leaders of Saudi Arabia and Qatar and the crown prince of UAE emirate Abu Dhabi to clarify his 'concerns' about the tragic conflict.

Trump emphasized in the talks that 'unity in the region' is necessary for tackling terrorism. He also believes that 'the main purpose of this initiative is to stop funding for terrorism'.