Home / World / Qatar does not go through the knees 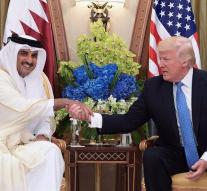 doha - Qatar is not supposed to change its foreign policy to satisfy other Arab countries. The dispute threatens the stability of the entire region, but can never be resolved by military means, said the Arabian Gulf State Secretary of State on Thursday.

'We do not intend to give up the independence of our foreign policy,' said Sheikh Mohammed bin Abdulrahman al-Thani. The minister spoke with journalists about the conflict with, inter alia, Saudi Arabia, the United Arab Emirates and Egypt, which broke relations with Qatar because Qatar would support extremist groups. He said his country has never been so hostile.

Despite this hostility, Qatar wants to meet the contracts for the supply of liquefied natural gas with UAE, said Sheikh Mohammed. He said Iran has offered help to secure Qatar supplies with food, but Qatar has abandoned the offer.