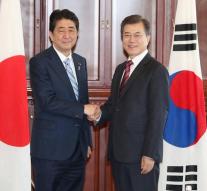 vladivostok - The North Koreans have taken an economic summit in Russia to warn the United States. According to the TASS press office, the envoy of Pyongyang said that his country has 'nuclear weapons, hydrogen bombs and intercontinental missiles.'

Minister Kim Yong-jae (External Economic Relations) said in Vladivostok that the US and their 'satellite states' host a hostile campaign against his country. 'We will respond with vigorous countermeasures to US's barbaric efforts to exert pressure,' he announced.

According to the minister, the US is doing well to keep in mind the 'nuclear status' of its country. Attempts to intimidate North Korea with sanctions are, according to the governor, useless.