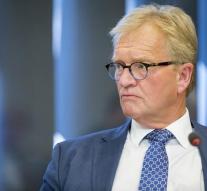 the hague - The Netherlands threatens to miss 17,000 jobs and one billion euros with additional tax revenue due to strict rules on bonuses in the financial sector. Employers' organization VNO-NCW is talking about what is termed 'symbol legislation', now that the House of Representatives will shortly decide on any adaptation.

'It's a totem pole where you dance around, which then does not bring rain but drought,' says chairman Hans de Boer. He has in the deepest secret, together with the Cabinet, tried to bring some reputable commercial banks to the Netherlands. Reportedly, Swiss UBS, US JP Morgan and English Morgan Stanley seriously consider opening new offices to, for example, the Amsterdam Zuidas, if the rules change slightly.

De Boer points to the extra billion of tax revenue that could come into that. 'There you can pay a lot of good care in our country,' he says.

The PvdA wants to help the plans for soap, now that it proposes not to adapt the current strict Dutch rules to the smoother European rules. Government sources say Minister Dijsselbloem (Finance) has shared secret knowledge about the cabinet efforts with his PvdA group. Thus, the country's interest was pushed aside for the profile of the Social Democrats.