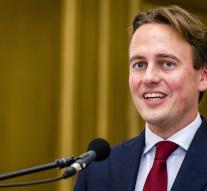 the hague - With the discussions about the budget, the PvdA has left its trench towards the VVD. Henk Nijboer, financial spokesman for the PvdA, sees 'sufficient basis to get out'. Today, the heads of the parties try to glue the shackles at the coalition meeting.

The tone is soft compared to the rebellious lies of PvdA leader Asscher who threatened to blow up the commissioning cabinet if there is no additional money for teachers at the forthcoming budget. He got the member's nose because VVD leader Zijlstra said that if it were the PvdA could whistle to accept her wishes.

Both parties recognized last week that they might have gone too hard. That nobody benefits from a break in a demarcation cabinet while being keyed in a new country administration also plays a role. Even parties that are currently trying to form a cabinet with the VVD (CDA, D66 and CU) realize that it is bad for politics to see if a cabinet is still in pain.

Last Friday after the end of the ministerial council, PvdA Minister Dijsselbloem (Finance) said that the problems were 'soluble'. VVD Colleges Camp (Economic Affairs) endorsed that: 'We always get out of it. '

'We still find that teachers at primary school need to get the appreciation they deserve,' says Nijboer. 'However, the VVD considers that as well. '

Nor does he expect any problems about purchasing power. 'The lower incomes and the elderly benefit less from economic progress. We do not find the null line for some groups righteous. The VVD endorses the need for a balanced purchasing power image. '

If the PvdA makes a reasonable statement, the VVD will discuss those wishes with the other three parties at the negotiating table, so is the expectation. The proposed new coalition would be best prepared to do something for the teachers' salaries.

In addition, the VVD and PvdA demissionary cabinet has something to celebrate. Since yesterday, Rutte II has been the longest-running cabinet since World War II. The coalition of VVD and PvdA now ruled 1750 days, now two days longer than Lubbers III (1989- 1994).

On Tuesday, the presidents of VVD and PvdA are equally silent at their record at a dinner at the Ministry of General Affairs.