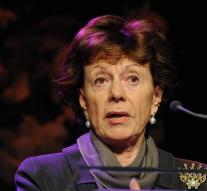 strasbourg - Forty Socialist MEPs have filed a complaint with the European Commission in response to the affair surrounding former Commissioner Neelie Kroes, on the initiative of Labour Party delegation Paul Tang.

Recently it became known that they had not reported her 'Brussels' time against the rules until 2009 that she was director between 2000 an offshore company in the Bahamas.

Because the danger of conflicts of interest is too great, the code of conduct for current and former EU commissioners should be strengthened considerably, write the MEPs. Tang announces that if the committee does not respond satisfactorily to the complaint, he presents the case to the European Ombudsman Emily O'Reilly. She retired last month to call on former Commission president José Manuel Barroso, who has accepted a job at Goldman Sachs.