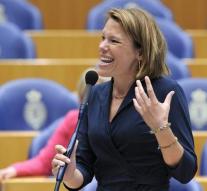 - Labour Party MP Lea Bouwmeester will not return after the elections the parliament. She announces that she wants to do something different time after ten years.

Concern spokeswoman for the Labour Party will continue to work in their own words for vulnerable people, but in society.,, The common thread has always been to stand up for the people who do not have the strongest voice, 'said the 36-year-old Bouwmeester.

As MP she has worked to raise the age limit for alcohol consumption. She is a strong advocate of transparent lobbying.