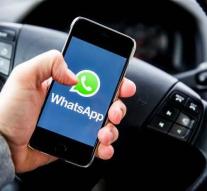 the hague - The incorrect use of smartphones in traffic must stop. To this end 41 organizations, including the ANWB, the Confederation of Insurers, the Ministry of Infrastructure, Transport and Logistics Netherlands and Samsung, signed a covenant on Wednesday.

The number of traffic deaths and serious wounded increases and research indicates that distraction by smartphones in traffic plays a major role here. For example, the chance to get involved in an accident is sending text messages while driving, or other text is imported 23 times higher than without this distraction.

SEE ALSO: Premiums up by app in car

According to Minister Melanie Schultz van Haegen (Infrastructure and Environment) there are cycling cyclists and cars everywhere. 'That's dangerous, I do not have to say. That's why it's great that so many parties make sure we keep our eyes on the road while driving. '

Full concentration on driving a car or other means of transportation must be the social standard and become a standard of behavior. The organizations want such electronics in the car, such as the smartphone, to be limited to using only non-derivative functions. For example, Samsung adds on all new devices an app that automatically responds when the user participates in traffic.

The ANWB will provide a staff to the staff this fall, which minimizes distraction of the smartphone in the car or on the bike. In addition, the Ministry of Infrastructure and Environment prepares a new campaign and is working on banning bicycles.