Home / World / Putin: we are looking for friends, not enemies 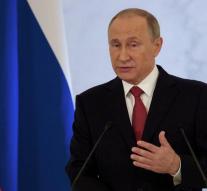 moscow - Russia wants to cooperate with the United States, for example to tackle global terrorism. President Vladimir Putin said Thursday in his annual address to the nation. His speech was remarkably friendly and conciliatory tone toward the United States.

The relationship between Russia and the US cooled in recent years affected by the war in Syria and the conflict in eastern Ukraine. But Putin wants after the election victory of Donald Trump, which is favorable to him, opening a new diplomatic chapter. ' We are ready to cooperate with the new US administration, '' he said. ' We have a shared responsibility for international security. ''

Russia wants ' no confrontation with anyone, '' Putin told his audience in a large hall of the Kremlin. ' We can not use it. We seek no enemies and who never sought. We need friends. ''