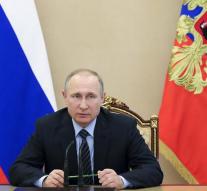 paris - Russian President Vladimir Putin called on Emmanuel Macron to set aside the 'mutual distrust'. The Russian leader made that call in a telegram with which he congratulated the French politician on his election victory.

Putin wrote to his future colleague that Moscow is ready to work constructively in bilateral international issues. 'The citizens of France gave you the confidence to lead the country in a difficult time for Europe and the entire international community,' the president said.

'The growing threat of terrorism and armed extremism coincides with the escalation of local conflicts and the destabilization of the entire region,' warned Putin according to the Kremlin. He said he wanted to work together to ensure 'international stability and security'.

Putin had probably preferred another candidate than Macron in the Élysée. For example, the Rus unexpectedly received the right candidate Marine Le Pen on the Kremlin a few weeks before the elections. Macron also complained that he was blackened by some Russian media.