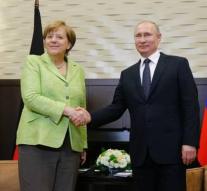 sotsji - Russia condemns the use of chemical weapons by anyone and wants a complete and independent investigation into the poison gas attack last month at the Syrian city of Khan Sheikhoun. That said President Vladimir Putin after an interview with German Chancellor Angela Merkel in Sochi.

'The guilty must be found and punished. But that can only happen after an independent investigation, 'said Putin.

'A solution to Syria can only be found with peaceful means and under the protection of the United Nations,' he continued.