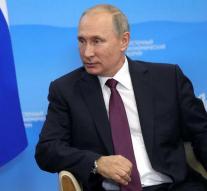 moscow - Russian tech companies risk exploiting government clusters if they continue to use foreign software. For that reason, Russian President Vladimir Putin warned, which, according to press agency Interfax, suggested that such computer programs could pose a threat to state security.

Putin said that public services can not cooperate with companies that still use foreign software in all cases. Otherwise there would be a risk of 'pushing a button and turning everything on black.' He pushed representatives of the technology sector at heart, 'keeping that in mind'.

Russian government agencies have largely switched to software from own soil. However, private companies would still use largely imported technology.

Not only in Russia there is nervousness about risks associated with the use of foreign software. The US government removed Russian-based cyber security Kaspersky Lab earlier this year from two lists of approved public service providers.