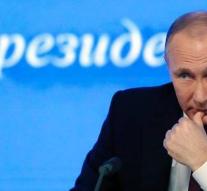 moscow - Russian President Vladimir Putin has lashed out hard at the Democratic Party of the US politician Hillary Clinton. The famous American President Franklin Delano Roosevelt would turn in his grave according to Putin when he saw what getting up to his political descendants.

The US government accuses Russia of interference in the presidential elections, which were won by the Republican Donald Trump. According to Putin is nonsense. The Democrats are in his eyes and sore losers a party 'the original meaning of the proper name is forgotten. '

'The current government and the leaders of the Democratic Party seek external factors to blame all their failures,' sneered the Russian leader, who praised the incoming president. 'Trump understood the mood of the people and continued until the end, when no one believed in him,' said Putin at his annual news conference. 'Except you and me. '