Home / World / Putin: Turkey penalties will be phased out 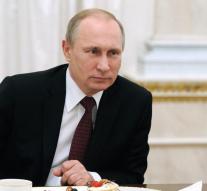 - The sanctions that Russia be brought against Turkey gradually phased out in the near future. That Russian President Vladimir Putin said Tuesday after meeting with his Turkish counterpart Recep Tayyip Erdogan.

Erdogan said that he and Putin both want as quickly as possible to normalize relations. The talks were in St. Petersburg ' comprehensive and useful, ' said Erdogan. Erdogan also pointing out that Putin called him last month after the failed coup. That call meant a lot to Erdogan, he stressed. Putin condemned the coup attempt. ' I want to reiterate that we are fundamentally and categorically against all kinds of unconstitutional actions are opposed. '

The Turkish President's visit to St. Petersburg was the first step in the rapprochement between the two countries. Relations were severely strained after Turkey, a Russian fighter in the sky last lap of the border with Syria. Russia supports the Syrian regime of President Bashar Assad, while Turkey supports rebels in Syria. Yet Putin believes that he and Erdogan can bridge the differences over the conflict in Syria.,, I think it is possible to have our views and approaches to match.