Home / World / Putin: Trump did not give a secret price 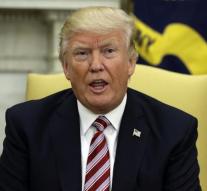 moscow - US President Donald Trump has not given any secrets during his conversation with Russia's Foreign Minister, Sergei Lavrov, among others. That has stated Russian President Vladimir Putin on Wednesday.

Putin also said that he has the text of the conversation and can give to the US Parliament. According to the Russian president, Trump is opposed and unable to work normally. Anti-Russian sentiments in the US damage the relationship between both countries, according to Putin.