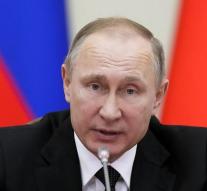 moscow - President Vladimir Putin has thanked the Russians for their support in times of crisis. 2016 was 'not an easy year, but the problems we have encountered in our united and have helped to mobilize our vast reserves of our ability to move forward.'

'I want to thank you sincerely for your genuine, heartfelt concerns about Russia,' Putin said in a speech broadcast by state television.

Moscow ended the year with one of the worst crises in the relationship with Washington since the end of the Cold War. Besides the wars in Syria and Ukraine and NATO operations in Eastern Europe spoiled allegations about Russian computer security breaches in the US in the atmosphere. Moreover, Russia camp two years of recession.

'The main thing is that we believe in ourselves, in our own strength and our own country,' Putin said.