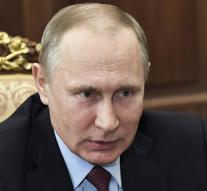 moscow - Russian President Vladimir Putin is willing to play a 'constructive role' in resolving the nuclear threat of North Korea. He said Friday in a telephone conversation with his newly elected South Korean colleague Moon Jae-in, according to the office of the South Korean president. The Kremlin talked about the need for a political and diplomatic solution in the North Korea crisis.

'We hope Russia plays a constructive role in stopping North Korea from deploying its nuclear provocations and deploying the road to disarmament,' the Moon quoted in the 20-minute interview with Putin. Moon also wants to find a way to quickly start talks between North Korea and South Korea and the relevant United States, China, Japan and Russia interlocutors. In 2008, the talks stopped after North Korea launched a rocket launch.

The tensions over North Korea's nuclear program have grown sharply in recent months. The fear is that North Korea will do a sixth nuclear test or test a ballistic missile again in violation of United Nations resolutions (UN).

President Moon is a liberal who advocates a more conciliatory approach to North Korea compared to his conservative predecessor.