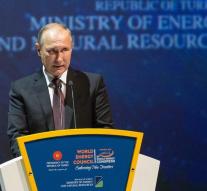 - Russian President Putin has canceled a visit to Paris. He would next week to come to the French capital to open a Russian Orthodox cathedral next to the Eiffel Tower, visit an exhibition of Russian art and meet his French counterpart Hollande. But Tuesday morning, Putin decided to forgo according to French sources of the visit.

France and Russia are diplomatic loggerheads. Last weekend blocked the Russians a French proposal at the UN Security Council on Syria. The French wanted the council would decide for an immediate end to the air strikes on the Syrian city of Aleppo, but by a Russian veto the proposal ended up in the trash.

According to a source had the French President Putin invited into the office of Hollande to talk yet about Syria, but he did not engage in other activities with the Russian head of state. Then Moscow responded that the visit is 'suspended', without setting a new date.