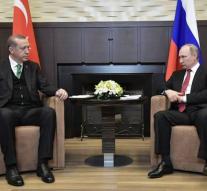 SOTSJI (ANP / RTR)- The relationship between Russia and Turkey has been fully restored. That said Russian President Vladimir Putin on Wednesday after a conversation with his Turkish official Recep Tayyip Erdogan in the Russian city of Sochi.

The relationship between the countries reached a low point two years ago when the Turkish armed forces dropped a Russian fighter at the border with Syria. Moscow imposed economic punishment on the Turks.

Meanwhile, the cold is completely out of the air. 'Some time ago our bilateral relations were tested', Putin said at a press conference. 'Now we can be sure that the recovery process between Russia and Turkey has been completed. ''

The Russian leader further said that the countries would set up a joint investment fund. Moscow is also willing to help improve security measures around tourist locations in Turkey.