Home / World / Putin prepared to fight together against 'enemy' 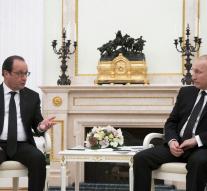 moscow - Russian President Vladimir Putin to his French counterpart Francois Hollande said that terrorist acts compel both countries to work together against a " common enemy ". He stated that Moscow is ready to work together with Paris.

Hollande had said earlier that the world powers should form a grand coalition in the fight against Islamic State in parts of Syria and Iraq.

" Our enemy is Islamic State, which areas, army and tools has ", Hollande said at the beginning of his meeting with Putin. " I am in Moscow to see how we can cooperate and coordinate so that we can get this terrorist movement, but also to achieve a solution for peace ", said Hollande.