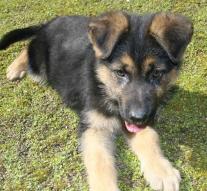 sotsji - The dog lover and president of Russia Vladimir Putin received a special sheepdog for his birthday. On Wednesday, he received a puppy from the ancient Alabai breed from his Turkmen colleague Berdimoechamedov. This is a Turkmenian variant of the Central Asian Sheepdog.

Berdimoechamedov took the dog on visit to Putin in Sochi. Putin is very happy with it and called the animal Verni, which is loyal in Russian. Putin has become 65 years old on October 7th.

The Turkmen leader is, among other things, visiting Putin to wipe off his natural gas. Russia stopped last year with imports of Turkmen gas because of a price conflict. Turkmenistan is a relatively isolated dictatorship where former dentist Berdimoechamedov dominates over 5.6 million people and the world's fourth largest natural gas reserves.

Alabai belongs to Turkmenistan's honored national heritage, like some carpets, a racing species and the melon where a national day, the Meloendag, is dedicated.