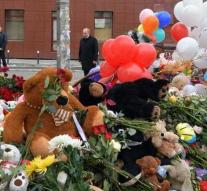 moscow - Russian President Vladimir Putin says the deadly fire in the shopping center in Kemerovo was the result of 'criminal negligence \u0026 quot ;. That reports the state television from the Siberian city. Putin arrived in Kemerovo on Tuesday. He will visit the site of the disaster later in the day.

According to officials investigating the fire, a security guard from the Russian shopping center where more than sixty people were killed, turned off the public address system. Emergency exits of the building were also blocked.

Eleven children are certainly among the dead. Many of them were at a playground in the complex. Presumably the fire started in the vicinity of that spot.

The police arrested three people after the fire. Among those arrested would also be the director of the shopping center.