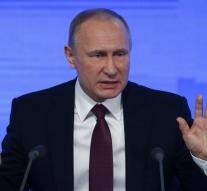 moscow - Russian President Vladimir Putin expressed confidence that relations between Moscow and Kiev 'sooner or later' will normalize again. Putin said Friday at the annual press conference he holds at the end of the year.

Russia and Ukraine argue inter alia, the Russian annexation of Crimea and Moscow's intervention in the conflict in eastern Ukraine. According to Putin, the bridge being built between Russia and help the peninsula to develop humanitarian and commercial ties between the countries, as the relationship between Kiev and Moscow weather is slightly better.

The president also said that Russia in a few days begin supplying natural gas to the Crimea. The Russians build a gas pipeline between the annexed peninsula and the Russian mainland. 'In the next two or three days, we announce that the work has been completed and the supply of gas has begun,' said Putin.