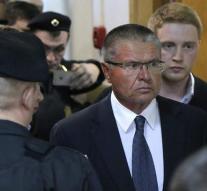 According to a Commission of Inquiry was Oeljoekajev threatened to block the takeover of oil company Bashneft by state oil company Rosneft. Rosneft would have paid the Minister $ 2 million (more than $ 1.8 million) to make sure that the acquisition could still continue.

The minister was arrested in the night of Monday to Tuesday. He faces a prison sentence of up to fifteen years. Oeljoekajev himself denies that he is guilty of corruption.

Putin suggested Oeljoekajev in June 2013 as economy minister. Since the breakup of the Soviet Union in 1991 has not been a person arrested on such a high position.