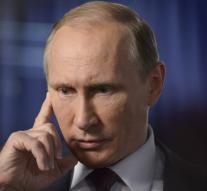 moscow - While the Russian air force assault continues to perform above Syria , President Vladimir Putin in Moscow Tuesday again urged a political solution to the civil war. At the same time he accused the United States does not want to cooperate. "I think some of our partners have just porridge in the head ," Putin said at a meeting for businessmen.

" If we do not just want to shoot , but to find a political solution , should the forces in the country along with other forces on the territory of Syria to cooperate come ", said Putin. To this end, all foreign forces must , according to him exert their influence on all Syrians .