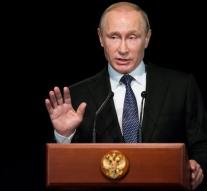 ljubljana - Russian President Vladimir Putin Saturday in Slovenia attended a memorial service for Russian victims of the First World War. One hundred years ago, three hundred Russian prisoner of war in the eastern European country by an avalanche killed.

A memorial service was held in the so-called Russian Chapel Krajnska Gora, in the northwest of Slovenia, near the border with Austria. The chapel was built in 1916- after the avalanche- by Russian prisoner of war, in memory of their killed buddies.

Putin's visit to Slovenia was not uncontroversial, given the tensions between Russia and the West. Slovenia is a Member of both the European Union and NATO, two organizations with which Russia is living at odds. The Slovenian authorities indicated beforehand that Putin's visit was a humanitarian matter, nothing more.