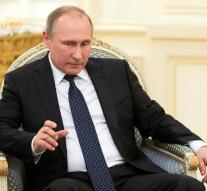 - Russian President Vladimir Putin has arrived in Crimea for a meeting of the Russian Security Council. The visit comes at a time when tensions between Russia and Ukraine about Russia annexed peninsula rise again.

Putin had hoped know it,, common sense '' of the Ukraine to find a solution to the diplomatic crisis.,, Russia will not cut diplomatic ties with Kiev, despite the unwillingness of the Ukrainian government to maintain full political ties at embassy level. ''

Ukrainian President Petro Poroshenko last week to all military units in the vicinity of the Crimea and the eastern Donbass region commissioned into high alert. The call came after the Russian accusations of a Ukrainian invasion in Crimea.


Putin will have under the Security Council about additional security measures in the Crimea.