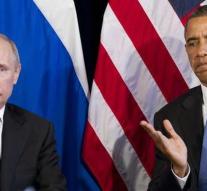 - US President Barack Obama and his Russian counterpart Vladimir Putin on Sunday said four minutes together on the summit of the Asia-Pacific Economic Community.

In the short conversation in Peru showed the two presidents know that it is regrettable that no progress is made in resolving the crisis in Ukraine.

They told wish to further work on the implementation of the peace agreement in Minsk. It includes inter alia the rebels in eastern Ukraine and the Ukrainian army must adhere to a cease-fire. They also pledged to work together on a solution to the civil war in Syria.