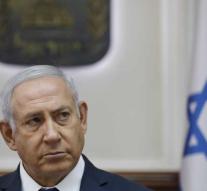 jerusalem - Israeli Prime Minister Benjamin Netanyahu said Sunday that he will shortly talk with Russian President Vladimir Putin about the occurrence of military incidents over Syria. Netanyahu said he agreed with Putin on Sunday during a short telephone call.

A date for the meeting has not yet been announced. Russia reported last week that it will deliver the S-300 air defense system to Syria's ally within two weeks. That will significantly increase the effectiveness of Syrian air defense, said Russian minister Sergey Sjojgoe (Defense).

The decision follows the knockdown last month of a Russian aircraft at Syria. The Syrians accidentally shot the plane out of the sky trying to repel an Israeli attack. The Russian Ministry of Defense has blamed Israel for using the plane as a shield. The Israeli forces argued earlier that the Syrians were blindly firing.