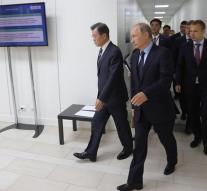 seoul - Russian President Vladimir Putin does not want to stop oil supplies to North Korea for the moment. Such a measure could affect patients in North Korean hospitals or other citizens, according to Putin, according to the South Korean press office Yonhap.

South Korean president Moon Jae-in asked his ambassador to Vladivostok to support such an oil embargo. 'The president asked Russia for help and noted that it is necessary to stop at least the oil supplies to North Korea this time,' said Moon's spokesperson.

Moon wants the UN Security Council to set an oil embargo against Pyongyang. This has to force the North Korean regime to enter into a dialogue again. Putin emphasized earlier this week that his country exports only a negligible amount of oil to North Korea.