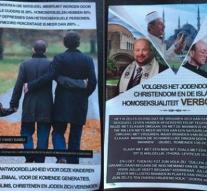 Residents in West Amsterdam did this weekend such flyers on the bus. Sunday had been twenty people have reported. The COC wants to analyze the texts and trying to figure out this way who distributed the flyers.

Also member of parliament Ahmed Marcouch called on Twitter to do in return.

The leaflets state according to the COC include that 29 percent of children who grow up with gay parents would be sexually abused. Muslims, Jews and Christians should unite according to the authors of the pamphlet against gay people.