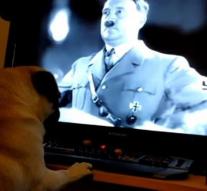 - A dog who, by command, brings the Hitler greeting and responds to Nazi pronouncements, has caused a lot of sorrow to her boss. According to 29-year-old Suzanne from Scotland, her friend had trained her 'sweet little' dog of Buddha to do all that.

Last April, boyfriend and comedian Mark Meechan was arrested on suspicion of hate crime, committed a crime from a prejudice. Meechan had made a video of the puppy and put it on YouTube. This has been viewed more than three million times.

According to Suzanne Kelly from the Scottish Coatbridge, Lanarkshire, has now declared to her judge that her boyfriend only did to annoy her. In another video, he apologized for the fuss caused.

'I did not think it would have so much effect. Mark can no longer work because of this. My sweet little Buddha seemed like a monster. Nazis are monsters. 'Suzanne also said that her boyfriend is not a racist and has never shown anything about anti-Semitism, according to The Sun.

The judge also heard the director of a Jewish community from Scotland. Ephraim Borowski, 66 years old, called the video 'very offensive. 'The website of his association was bombarded with comments after the video was released. '

Meechan has declared nothing to have missed. He is now suspected of posting an anti-Semitic video with a religious prejudice. The lawsuit will continue in November.