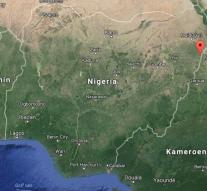 yola - Two schoolgirls have blown up in Nigeria and at least thirty people dragged into death. This happened at a busy market in the town Madagali in the northeast of the country.

A spokesman for the army were 57 people injured. 'The attack was carried out by two schoolgirls Madagali' he said.

The area has for years plagued by violence from the extremist Islamist group Boko Haram. Responsibility for the attack Friday has not yet been claimed.