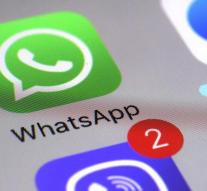 breda - A convicted 36-year old man from Breda Thursday because he threatened his ex and stalking, including through its status information in WhatsApp. To our knowledge it is the first time that the court has determined that the status information can pose a threat.

Jealous man attacked the 33-year-old woman for months bother with phone calls, text messages and voice messages. After she had blocked his phone number, he still communicated with her through his status in WhatsApp. The defendant knew that she frequently looked at it. The woman made screenshots of the status messages and moved it to the police.

'I want to kill. You're not safe, 'he placed among others in English in the status bar. 'The day of truth is near,' he also wrote in Papiamento.

Lawyer Frank Koningsveld asked for acquittal because the status messages are not necessarily aimed at the woman and she herself took the initiative to look. The court swept it from the table and condemned the Bredanaar include community service of 120 hours, a compensation of 750 euros and a restraining order.