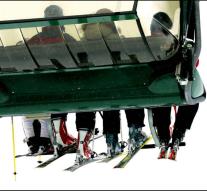 - A court in France has a staff member of a ski lift found guilty of the death of a 14- year-old British teenager. It came during a school killed when his backpack got stuck in the mechanism of the lift. The employee (50), in charge of security, was not at his post and then also not responded to calls of other winter sports to an emergency stop.

The incident took place in 2011 in the French ski resort Châtel at the Swiss border. The employee was convicted of involuntary manslaughter and received Tuesday imposed a six months suspended prison sentence, according to British media. The company that operates the ski lift, also was indicted but was acquitted.