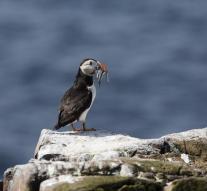 egmond aan zee - VIDEO- A puffin was found in the Noord-Holland seaside town of Egmond aan Zee on Friday night. The bird has been handed over to an employee of Ecomare Nature Center on Texel, where the Puffin is taken care of.

Dierenambulance Noord-Kennemerland (THANK) writes Saturday on her Facebook page about the rare finding. According to THANK, the Puffin was weakened and slipped when they found him. After the animal had a 'good night's sleep', the bird was delivered to the ferry service in Den Helder.

On a video you can see how the Puffin is held by an assistant star. 'These are those special moments that will never be forgotten,' said the animal ambulance.