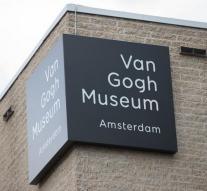 - The French publisher of the book 'Lost sketches' by Vincent van Gogh wants a public debate with art experts to put an end to the controversy surrounding the drawings. Les Éditions du Seuil invites to organize together the debate Van Gogh Museum in Amsterdam, the publisher said Thursday.

According to the publishing house the museum feels alone to determine whether or not drawings by Van Gogh and his is not justified.

In 'Vincent van Gogh. Lost to see sketchbook from Arles' by art historian Bogomila Welsh-Ovcharov 65 drawings of the Van Gogh writer. According to the museum are the imitations.

The drawings made with brown ink, while the artist then working with black or purple ink. Also, use a different type of paper, there are topographical errors in the sketch and the drawing style 'monotonous, helpless and powerless,' says the museum, which also questions the origin of the sketchbook.

Through the publishing Welsh-Ovcharov looks at each of the criticisms raised by the museum. She says she stands by its conclusion that Van Gogh's drawings.