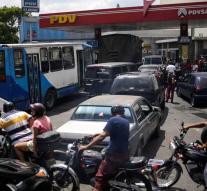 caracas - Venezuela also does not manage to solve the power outage after four days, which has been ravaging part of the country since Thursday. On the government's orders, the schools and...

This disturbance has been remedied for a large part, but there are still parts of the country without electricity. How many Venezuelans were hit on Sunday is not known.