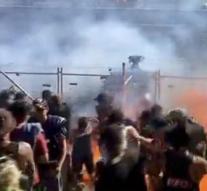 alice springs - Twelve people got injured last weekend when they were watching a race race in Australia. From one of the cars, which called a so-called, sprinkled burning gasoline on the race fans in the public.

On images of the bizarre incident, you can see how big the flames are and how people hit the fire. Of the twelve wounded, eleven had to be transferred to the hospital. A man of 47 became so seriously injured that his condition was critical.

The event was stopped after the accident. The Australian police has opened an investigation.