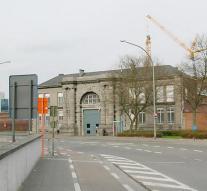 strasbourg - The Council of Europe's anti-fouling committee judges destructively about the Belgian prison system, especially at strikes. There is a risk that 'situations that are already considered unacceptable will become even worse', the committee wrote in a report on Thursday.

Especially in the months of prison staff last year, the health and lives of detainees were at stake. They are almost permanently in their cell, making medical care and personal hygiene poor. Also, meals were not or barely provided, and in the courtyard airways and contact with the outside world were practically impossible.

'Unacceptable' is the judgment. 'The Committee has conducted many visits to the 47 Member States of the Council of Europe in the last 27 years, and it has never before seen a similar phenomenon, both in terms of size and in terms of the risks involved.'

The committee visited Belgium ten times since 1993 and has been reviewing the strike issue for twelve years. The lack of progress since many years to ensure the rights of prisoners in strikes results in a serious lack of cooperation with the committee, stated in the report. 'Due to serious incidents during strikes with sometimes death, serious questions arise as to whether the authorities and those responsible for such actions are able to control their consequences. '

The Torture Prevention Committee and Inhuman or Degrading Treatment or Punishment calls on the government and unions to quickly find a solution to this 'extremely serious problem.' '