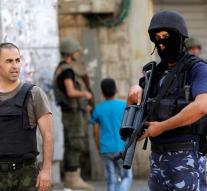 nablus - In the city of Nablus on the West Bank erupted on Tuesday violent protests following the death of a prisoner.

Palestinian police have beaten to death a man after his arrest, said the governor of Nablus and a spokesman for the Palestinian security forces earlier.

Hundreds of angry demonstrators marched through the city, some throwing stones. It is unclear whether injured. Also about any arrests is still unknown.

Palestinian Ahmed Halawa was arrested Monday night. He would have argued a group of men who last Thursday during a raid against criminals in Nablus two agents killed in a firefight. During the chase two criminals were slain on the perpetrators. Halawa was a member of the al-Aqsa Martyrs Brigade, a group that is considered terrorist organization by Israel and the European Union among others.

In the autonomous Palestinian towns on the West Bank, the Palestinian police in accordance with the peace agreements with Israel responsible for the security. This prevented the Israeli army not to perform regular searches and arrests in the area.