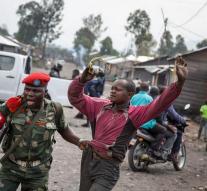 kinshasa - In several neighborhoods in the Congolese capital Kinshasa protests erupted Monday, when police tear gas deployed to disperse the people. The term of President Joseph Kabila namely ends around midnight and it has previously announced that he would step not yet.

People marching in protest excursions blew whistles to let noisily to Kabila that he must relinquish power.

A police spokesman in the Congo would give no explanation of the events.

Also still protested to the Congolese embassy in Brussels. Seventy Congolese argue that before the departure of Kabila.