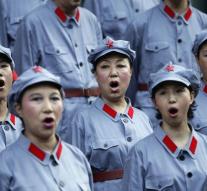 peking - Mocking their national anthem, Chinese can now come to the cell in fifteen days. The Chinese National People's Congress (NPC) has approved a law to protect the 'dignity' of the 'Volunteer Mars' song.

The law also stipulates where and when the song may be played. For example, it is now taboo to use the march as background music and in advertisements. Even at funerals and other 'inappropriate occasions', the national anthem can no longer be heard.

Those who are guilty of deviant or 'mockery' designs can also count on a day-long stay in a police cell. The anthem is thus given the same status as the Chinese flag. Misuse of that symbol has been punishable since the 1990s, including in 'autonomous' areas like Hong Kong and Macau.