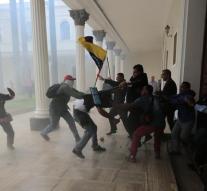 The protesters entered the building while the parliament met on Independence Day. The government supporters attacked both journalists and politicians. Explosions were also heard. It is probably about fireworks that were erected outside the building.

The opposition dominates the Venezuelan parliament, which regularly interferes with the socialist government led by President Nicolás Maduro. Venezuela has been in the grip of a political crisis for months. Since the massive protests against the government began in April, almost ninety people have already come to life.

The economy of the oil-rich South American country has largely collapsed, partly because of mismanagement and low oil prices.